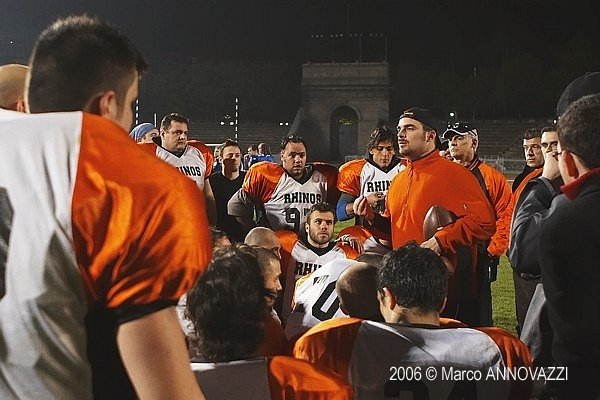 When I first arrived in Italy I didn’t even know that there was an American football league. After some internet searching I found a team in Milan, the Frogs, where I helped coach their junior team for a brief period.
After the season the coach recommended me to the Rhinos, a historic football team in Milan that was rebuilding from the ground up. The team was made up mostly of players with little or no experience that ranged in ages from 15 – 45 years old. My first year with the team I coached and played on the flag football team which ended up winning the championship in it’s first year.
The following year I took on the role of head coach/Defensive Coordinator of the first team. This was my first year as a head coach and was surprisingly successful considering that the team had not won a game the year before. We played in Serie C and ended up winning the championship after losing only one game. I was awarded “Best Coach of the Year” from FIAF (Federazione Italiana American Football). The following year we played in Serie C again, with me stepping down to only a
coordinators role due to the birth of my son, the team lost in the championship game.
When I took over again as head coach the atmosphere had changed and the team that had moved up to Serie B where the other teams were much stronger. We were able to make the playoffs only to lose in the first round. My final year as a head coach was really trying on me, because I knew that it would be my last with the team because of my wife’s job transfer and also the fact that we wanted to try to have another child. The team had moved up to Serie A2 and ended up challenging for the title losing
to the future champion in the semi-finals. We had only lost one game during the regular season to a team that many had predicted would win the championship. We were able to avenge our loss on their field in the first round of the playoffs.